DID BLACK WARRIORS FIGHT UNDER ALEXANDER THE GREAT 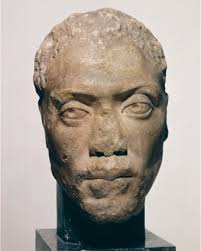 Alexander had two officers named Cleitus, Black Cleitus and White Cleitus. Black Cleitus led Alexander’s bodyguard, and he was right at his side in Alexander’s first battle in his Conquest of Asia, the Battle at the Granicus River (334 BCE).

Near the outset of the contest, Alexander dashed out ahead of the main body of cavalry to do hand-to-hand combat with the Persian commanders. His bodyguard quickly surged around him. No sooner did Alexander dispatch one foe, than another struck him a stunning blow on his helmet as another raised his sword to dispatch him. But Black Clietus severed the upraised arm before it could strike. If he had not, World History would have been vastly different.

Thus began a decade long series of wars, conquests and travails. At last his men grew weary. And it was Black Cleitus who gave voice to their lament. Black Cleitus’ sister Lanice, had suckled Alexander as his wet nurse . And Black Clietus had been a trusted commander for years under Alexander’s father, Phillip, when Alexander was a child, distinguishing himself in the wars to consolidate the Greek city states under Macedon’s banner.

At court one day, while Alexander and his generals were lounging around the wine table, Black Cleitus gave loud, insistent voice to the men’s discontent at the endless campaigning. Alexander became enraged and ordered the guards to seize Black Cleitus. They would not. And so Alexander went for a sword. . .

Alexander had inherited the kingdom of Macedon from his father, Phillip. Macedon was located on the northern fringes of the Greek speaking people. From this hinterland region Phillip organized a full-time, fiercely disciplined standing army. Unlike the small, warring Greek city states to the south, Macedon was a large expanding territory. All the outlying regions Macedonians conquered were annexed, and all able bodied men thus became citizens and soldiers. Macedon’s dominion stretched north towards the Black Sea region, where it is believed the Egyptian Pharaoh Sesostris, in the course of his conquests, had long before left a large contingent of soldiers whose descendants populated the area.

. . .Those present at the argument in the Royal Court, removed the sword before Alexander could get to it, and they quickly hustled Black Cleitus out of the room. At this point, Alexander cried that he was facing a mutiny and ordered the guards to sound the alarm to bring the entire camp to battle order.. .

So given that Macedon stretched to the Black Sea, given that he was known as Black Cleitus, as opposed to White Cleitus, and given that his sister Lanice was Alexander’s wet nurse, is it not likely that Cleitus was, in fact, Black?

. . . The guards ignored Alexander’s direct order, and refused to gove the alarm. Meanwhile, Black Cleitus was safely out of the way. So Alexander would have time to cool down. But he did not. Cleitus suddenly came charging back into the room to vociferously continue the dispute. This time Alexander did reach a weapon, and he killed him on the spot.

For a while there was danger of a real mutiny. Meanwhile, Alexander fasted and mourned for days, at points crying how could he ever face Lanice again after two of her sons died fighting under his banner, and he had just killed her brother. Eventually, the men fearing he would perish leaving them stranded thousands of miles from home, begged him to come to his senses. . .

However, the question, “Was Clietus Black?” is really quite an anachronistic query. The notion of “race” did not exist in the fourth century BCE. So what we are really saying is, “If Black Cleitus lived today, would he be considered Black?” ( Arthur Lewin, www.AfricaUnlimited.com )

Arthur Lewin is a member of the Black and Latino Studies Department of Baruch College of the City University of New York. He is the author of the books, Africa Is Not A Country: It’s A Continent and Read Like Your Life Depends On It. He writes on a wide variety of topics, and greatly enjoys the free exchange of ideas and opinions on the internet with people all around the country and the world. Send him a note today.