From PANGEA To The PYRAMIDS 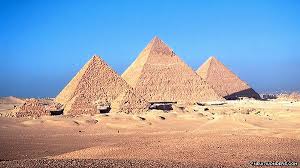 Have you ever noticed how the Continents look like they could all fit together in a giant jigsaw puzzle? Well that’s because they were, all together that is, until about 200 million years ago. And then Pangaea, the super-continent, began to break apart.

The Earth’s surface, its “crust,” is made up of a number of huge plates that are slowly, ever so slowly, shifting. Earthquakes are the sudden, violent release of the ferocious, pent-up energy this process produces. The African mainland is located on one huge “tectonic” plate. The Arabian peninsula, which is gradually pulling away from the continent, is on another. The narrow channel that is the Red Sea was made by the relentless rubbing together of these two tectonic plates.

The tension from this tear in the Earth’s surface runs down the entire eastern half of the continent producing the Great Rift Valley, the longest “fault line” on earth. The Nile, longest river in the world, begins in the waters of the Great Lakes in the mountainous highlands at the center of the Great Rift Valley. It flows 4,000 miles north to empty out into the Mediterranean Sea…

One of the principal human attributes is the ability to make and use tools. The oldest fossil remains of tool-using creatures are found in the Ethiopian section of the Great Rift Valley. They are at least 5,000,000 years old… Science now informs us that all Europeans are descended from a group of no more than 50 Africans who left the continent between 60,000 and 27,000 years ago. And Asians, we are told, descended from people who left Africa 200,000 – 100,000 years ago…

For the last 6,000 years or so, the northern third of the continent has been drying, thereby becoming what we now call the Sahara Desert.  Over time, as conditions worsened, the population of the region converged on the lakes and waterways that remained, the mighty Nile River was the most important by far. Along its fertile banks, washed with thick black soil from the heart of Africa, there arose the earliest civilization.

Around 4,000 BC the Nile was lined with a series of agricultural communities which gradually grew in size and complexity.  By 3100 BC, two mighty kingdoms had developed in the last few hundred miles before the Nile reaches the Mediterranean. Today we know them as Upper and Lower Egypt. After a climactic conflict they were united as one, and the ruler of the two lands became known as the “Pharaoh.” The Pharaohs, hundreds of kings and queens in scores of dynasties, would go on to rule Egypt for more than 3000 years. Soon after Egypt was unified, the Great Pyramids at Giza, near modern day Cairo were constructed to commemorate this landmark event.

Egyptian colonies and military power eventually extended far and wide, penetrating deep into southeastern Europe, southwest Asia, Arabia and much of the nearby Sahara. The Egyptians exchanged trade caravans with peoples throughout the continent and with communities as far away as Pakistan. It’s believed that Egyptian ships reached Mexico on more than one occasion, but since the ocean currents move westward, they were unable to return.

The marooned Egyptians apparently settled in the Americas, establishing communities with the local peoples. The giant stone sculptures of the heads of African warriors (the Olmec heads), and the pyramids of ancient Mexico evidence Africa’s presence in the Americas centuries before the birth of Christ.

As for the Great Pyramids at Giza, they were built a thousand years before the birth of Abraham (father of the Arabs and the Jews), and about two thousand years before the legendary Trojan War memorialized by Homer in the epic poems the Illiad and the Odyssey.  About 2500 years after the pyramids were constructed, Socrates and other Greeks came as foreign students to study in the Egyptian university system. After returning to Greece, they were hailed as the first European philosophers.

The Nile Valley is the birthplace of writing, geometry and much of what we today call math and science. The story of Jesus Christ and Mary appears very much like a repeat of the Egyptian story of Isis and Horus.  Before the Roman Empire converted to Christianity, it followed Egyptian religion. The famous French cathedral, Notre Dame (Our Lady), is located at the site of a former temple to Isis during the reign of the Romans. (Isis was the Egyptian goddess said to be the mother of the god Horus.)

Over time as invaders swept into Egypt, from Asia and Europe, much of the original population of the Nile Valley dispersed throughout the continent. The Dogon of Nigeria are one such group. Their religious ceremonies center around the three stars in the Sirius constellation. The three pyramids at Giza form the same precise pattern as the three stars of Sirius. And the hollow shaft in the Great Pyramid at Giza is aimed at the brightest star in the Sirius constellation. (This clearly indicates that the Great Pyramid was, among other things, an observatory.)

It’s believed that in addition to the Dogon of Mali, the Gala of Nigeria, the Moors of North Africa and the Shona of Southern Africa, many, if not most, African peoples are descended from the Egyptians and the other pioneering peoples of the ancient Nile River Valley.

by Dr. Arthur Lewin, taken from his book, Africa Is Not A Country: It’s A Continent, www.AfricaUnlimited.com